A charter school board’s most important function is, arguably, to hire and ensure the success of your Chief Executive Officer. Implicit therein is responsibly setting the charter school CEO’s compensation. 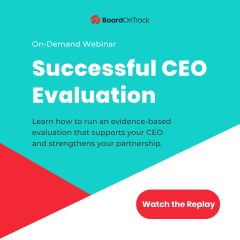 Even board members with HR and nonprofit leadership experience find this work challenging. Although they have direct experience benchmarking executive salaries, they’re intensely uncertain of how to establish “reasonableness” in their charter school CEO’s compensation structure. At least, that’s how one board member framed the problem during our recent webinar.

Before we you take a look at our own data as a benchmark, let’s look at the benchmarking best practices Allison shared during our recent webinar. When we benchmark a role, at minimum, we’re creating a realistic salary range for the job as it currently stands. You’re defining what the market rate should be for the person currently in the CEO role as it’s defined today. And, thinking more in terms of competitive compensation, what it would be if you were to hire somebody new. So, consider the job as it is today. And, consider the person currently in the role. Perhaps they exceed the necessary qualifications. Or, perhaps they don’t quite meet them. Because you want to benchmark what the range should be for the person currently filling the role, and should you need to fill the position anew.

Use similar organizations to benchmark your charter school compensation plan.

Charter school boards and CEOs should start by looking at charter schools. Look at schools in your local area, that are a similar size to yours, and that serve the same or similar grade levels. If you’re a small network of three schools, with one CEO reporting to the board and overseeing principals in each of those schools, try to find organizations with two-to-four schools for your benchmarks.

Has your charter school always tied your CEO’s compensation to the pay scale of the surrounding public schools or in line with your state’s Board of Education pay scale? If the organizations are similar in the ways mentioned above, this is probably acceptable. Still, it would be wise to segment out neighborhood public schools from public charter schools, to know whether there’s any difference in compensation structures.

Is your charter school in the midst of, or preparing for, a search for new executive talent? If your next benchmarking study will have a focus on competitively attracting new talent, consider where you’ll search for that talent. Will you seek people within your district or region, or go nationwide? Your benchmarking data set should match the scope of your talent search. (Learn more about talent search best practices in our webinar on charter school CEO succession planning.) Other organizational factors you might consider, including our nationwide data below, include overall budget, number of students, and per-pupil funding standards.

There’s so much variation in the CEO role in the charter school space. Compare your CEO’s role to roles with similar scope and scale of responsibilities. The role can be one person who seems to do nearly everything. Or there’s a Head of School and an Executive Director — one person manages the academic side of the house and the other is more of the business leader. For those types of roles, you might also benchmark them against the broader education or nonprofit landscape, to look at CEOs and those other types of positions as well. Fundraising goals can also be a major differentiator in charter school CEO roles. Some charter schools and boards don’t raise any money. Some are hiring CEOs to run major fundraising programs, like a $14 million capital campaign. The executive skillset, and relevant compensation, will be different for these types of roles. Consider also the number of people your CEO directly manages, alongside the number of employees overall, as well as even the CEO’s experience or education.

Once you’ve selected the right organizations and roles for your benchmark, you might use their 990 forms to gather relevant data on highest-paid employees. But, the data on 990 forms can be dated. To compensate, Edgility suggests that you age the data. Take the average rate of inflation over the past three years. Usually, it’s somewhere around 2.5% to 3%. That may change in this environment, but that’s a good rule of thumb.

Start by benchmarking against our charter school CEO Compensation data

Our first-ever survey of charter school CEOs received responses from school leaders throughout the nation, in a wide variety of schools and CMOs. Download the full report on that study. The full picture of what influences charter school CEO compensation is far greater than the numbers here. The report makes clear the role of the board-CEO partnership, an effective CEO evaluation, and the board’s understanding of the CEO’s role, in CEO compensation.

Below, you’ll see data points that weren’t included in the initial report. The interest in this data, from board members and CEOs alike, has been very high. The following data points have been specifically requested by board members and CEOs around the country. Are there additional data points your board needs to effectively benchmark your charter school’s compensation structure? Contact us here to get your questions answered.

CEO Demographics: Does a charter school CEO’s gender, race, education, or years of experience correlate to their pay scale?

One of the most surprising results of our research was the suggestion of a pay ceiling for women. And, while our data set in this first study was limited, Edgility’s  Allison Wyatt shared during our webinar discussion that their extensive salary studies also demonstrate a gender pay gap in the education space. What’s more, the gap is even more pronounced in the education space than it is in the broader nonprofit world. And it widens over time.

The majority of our respondents (65%) named their highest degree as a Masters of Education. A number of respondents hold a PhD, MBA, or Bachelor’s. And 7% stated none of the above was applicable to their highest degree earned. Those who report an MEd degree as their highest degree earned actually earn the lowest salaries when measured by either average or median. Their average salary is $127,850; the median $121,000. It’s not dramatically lower than that of those reporting Bachelor’s or PhD. Still, it begs the question of the martyr syndrome that Allison and Marci discussed on our recent webinar. Do educators who become charter school CEOs refrain from advocating for higher salaries for themselves?

Interestingly, the split of salaries as compared to total number of years in the charter school sector is a bit different. We see salaries below $150k and even below $100k persisting across the spectrum, while people who’ve been in their current role for longer are far less likely to earn below $150k, and the only salaries at below $100k are reported by people who’ve been in their current roles for a year or two. A number of people have asked if the data shows a difference in compensation for founding CEOs as compared to non-founders. We’re looking forward to exploring that in the next iteration of the survey.

Geography: How much is a charter school CEO’s salary impacted by their location?

State or region:  Salary ranges are somewhat influenced by geography. While averages are fairly even, the CEOs in the higher salary brackets ($150k–$199k) and ($200k+) tend to be in states where the cost of living is elevated.
Type of community: rural, suburban, or city. 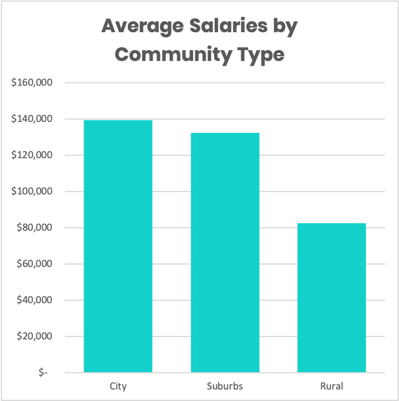 Most of our respondents (71%) identify their schools as being located in cities, 23% in the suburbs, and 6% in rural areas. As might be expected, the highest average and median salaries happen in cities, where living expenses are also highest. Schools located in suburban areas follow close behind, with rurally-located schools showing an average salary at 40% lower than that of urban counterparts and 38% lower than suburban counterparts. Readers have also asked about how grades served or local per-pupil funding might be correlated to CEO compensation. We look forward to exploring this data point in future iterations of the study.

Organization Size: How much does the size of the charter school or CMO correlate to a CEO’s compensation?

Size of the network The original report confirmed that CEOs at networks of schools are far more likely earn higher salaries, regardless of location. But what about the size of those networks? More data is needed here. With the limited data set, we’re not seeing conclusive correlations between network size and annual CEO salary.

Overall Operating Budget While there is a general upward trend of CEO salaries alongside annual operating budget, there is too much variation at each level to serve as a rule.

Number of Students or Number of Employees Overall, average CEO salary increases alongside student counts, with some outliers causing dips along the way. However, there are wider variations when we look at CEO salary alongside their counts of direct reports. Why does average salary fall steadily as the count of direct reports increases? Several outliers in the set reporting 10 to 50 direct reports, and earning under $100k annually. All but two of these are part of that cohort of MEd degree holders, who disproportionately skew towards the lower end of the salary scale.

One final note: don’t fear the elephant in the room

It may seem like, every year, there’s a terrible story about a charter school CEO being compensated at an exorbitant rate or even one who’s accepted a seemingly high salary but simply not delivered for the families and employees counting on them. Of course, bad news always gets the headlines. We don’t see headlines about the vast majority of charter school CEOs — the ones earning exactly what they should, or far less, while showing up every day for their people and doing incredibly difficult work, especially now.

We have a lot more martyrs than we do cautionary tales. It’s more likely for a CEO to just not be getting paid enough. The job is so hard. What is more important than educating our children? So, boards, do the market research. And CEOs, it’s ok to advocate for a better salary. There is this assumption that people are going to do some of this work for free. And that’s taking advantage of people. For some reason, in every other sector on the planet, that’s what it would be called. And in this sector, it’s called social service.

You may also enjoy:

Sam Falk was the Chief Customer and Product Officer at BoardOnTrack and is based in Concord, Massachusetts.