There’s very little data available about exactly what charter school CEOs earn, what factors influence their salaries, or how those factors play into charter school leader turnover and job satisfaction.

The results of our first-ever study of charter school CEO compensation begins to clarify much of this. And raises important implications for what boards and CEOs must do together to ensure charter schools thrive now and into the future.

Read on to learn:

-> Where we found disparities in charter school CEO salaries

-> Why charter school CEOs are choosing to look for new roles

Who is included in this data 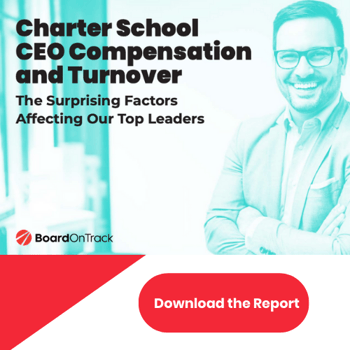 Our survey, launched pre-pandemic, received responses from 77 charter school CEOs throughout the nation.

The cohort is remarkably geographically diverse. Respondents represent both rural and urban communities in 25 states throughout the nation. The largest cohorts hail from California, New York, and Massachusetts.

They’re also demographically diverse. They represent a range of ages, races, gender identities, tenure, and education levels. Nearly ¾ of our respondents identified as Caucasian. The largest portion is in their 40s, with ages ranging from 30s to 60s. And they’re pretty evenly split between those who identify themselves as men vs. women, with slightly more men.

What these charter school CEOs earn

At face value, the data indicates that what charter school CEOs earn might seem simple. It’s largely uniform across states, and even across ethnicities.

CEOs at networks of schools are far more likely to fall in the higher salary brackets, regardless of location.

Nearly half of the charter school networks’ CEOs earn salaries in the $150k – $199k range. Only 18% of single-site CEOs earn at this rate.

And, while 16% of single-site CEOs earn less than $100k per year, no network CEOs earn at this rate.

Surprisingly, a relatively equal percentage of CEOs leading networks and single-site schools earn at the highest level — $200k or more. Download the report to see the charts and additional data comparing these two groups.

Largely, CEOs’ salary ranges seem to be evenly distributed across women and men. But, we found one surprising and noteworthy exception.

The data appears to show women who lead charter schools hitting a ceiling in the $150k – $199k salary range.

The percentage of women and men who earn above $150k is nearly identical — 35% of women and 37% of men surveyed earn $150k or more annually.

But, when we look more closely, it seems as though this piece of the pie is split for the men. Within that 37% of men earning $150k or more annually, 13% of them have pulled ahead into the $200k+ category. No women fell into this category.

What’s more, the number of people earning at this level is split relatively evenly across single-site schools and networks of schools. So, this disparity isn’t a result of men being more likely to lead larger organizations.

Considering this disparity alongside the limited size and diversity of the cohort represented in the data, more research would be warranted to understand any correlations between CEOs’ salaries and gender or ethnicity.

The highest-earning CEOs have a stronger partnership with their board

Where CEOs report a stronger partnership with their board, a board that better understands their role, and a consistent CEO evaluation, they also report higher salaries.

And, all CEOs who earn $200k or more report their boards understand their role well or very well.

And the difference increases as salaries increase. A full 90% of CEOs who have a consistent CEO evaluation earn at this level. Again, making them twice as likely to earn

What’s more. it seems CEOs whose boards don’t follow a consistent CEO evaluation are twice as likely to fall below the $100k salary mark.

The trend continues among CEOs who’ve received a pay increase in the last year.

These CEOs are more likely to have boards who understand their role, have a strong partnership with their board chair, and have a consistent CEO evaluation.

In fact, one respondent remarked, “We did [have a consistent CEO evaluation process]…For the past three years we have started the process but never completed it.  It has been 4 school years since I have had an increase.”

Implications for charter school CEO turnover: CEOs most likely to look for new roles also have a stronger partnership with their boards.

Nearly every CEO who reported not being likely to look for a new job had two things in common: a board that understands their role and a strong partnership with their board chair. In fact:

What’s more, 25% of those who said they’re somewhat or very likely to look for a new job rated their partnership with their chair as poor, fair, or just good.

Download the report to learn the five key differences among boards who understand the CEO’s role very well. 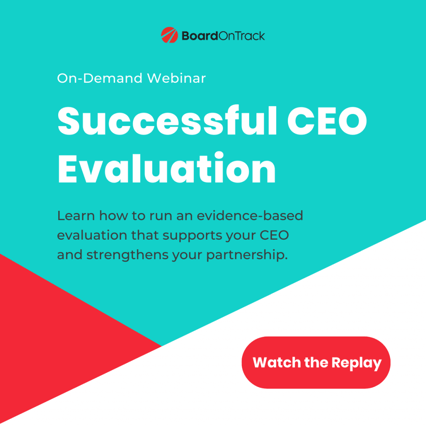 We received so many questions on our recent webinar exploring charter school CEO compensation, we’ll continue to dig deeper into the data in the coming weeks to share with you our findings.

This includes how salaries vary by key charter school characteristics:

What’s more, our data makes clear what boards — and BoardSavvy CEOs — must do to strengthen their partnership and help great CEOs choose to stay in their roles. More on that soon.

You may also enjoy:

Sam Falk was the Chief Customer and Product Officer at BoardOnTrack and is based in Concord, Massachusetts.